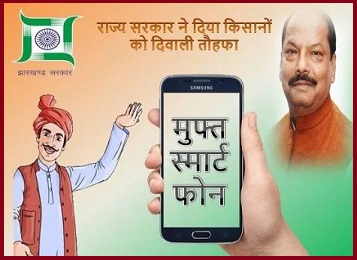 Jharkhand Government has decided to give free mobile phones to 28 lakh farmers and a separate electric feeder for them for agriculture purpose by 2019/2021.

Jharkhand Chief Minister Raghubar Das on 29th November 2018 announced this scheme while addressing at the inaugural function of 2-day Agriculture and Food Summit in Ranchi.

Jharkhand farmers will also be provided with a separate electric feeder, set up by May 2019 for agriculture purpose, providing them six hours of uninterrupted electricity.

CM Raghubar Das also proclaimed that by August 2019, the 24x7 power supply will be available in rural areas.

Besides, in a move to lessen farmers’ burden, Jharkhand government has also decided that no interest will be charged from farmers on agricultural loan for at least one year.

Jharkhand has shown the maximum turnaround in farmer’s life in the last four years in comparison to the other states. The state, which is both mineral and agriculture-rich, has achieved 19 percent growth in agriculture.

Jharkhand steps towards e-Mobility 2030 Target with the incl...