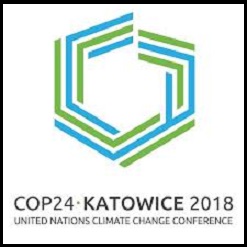 The UN 24th meeting of Conference of Parties (COP-24) to the United Nations Framework Convention on Climate Change (UNFCCC) is being held at Katowice, Poland.

The COP-24 is very significant as it is believed to finalize guidelines for implementation of the Paris Agreement adopted in 2016.

Union Environment Minister, Dr. Harsh Vardhan who is representing India, stated India is expecting a balanced, inclusive and consistent outcome with the principles and provisions of Convention and its Paris Agreement.

India firmly supports the objective of the Paris Agreement to strengthen the global response to the threat of climate change by keeping the global temperature rise well below 2 degrees Celsius from pre- industrial revolution period.

The Agreement also focuses on developing countries need to adapt to adverse impacts of climate change, in a manner that it does not put an additional burden on them.

During the COP-24, India would like to highlight its concern for climate change and reaffirm its commitments to finalisation of the Paris Agreement Work Programme.

India will be setting up a Pavilion to create awareness about India’s positive climate actions in various sectors of the economy.

The theme of Pavilion is ‘One World One Sun One Grid’ as highlighted by Prime Minister Narendra Modi during the first assembly of the International Solar Alliance on 2nd October 2018.