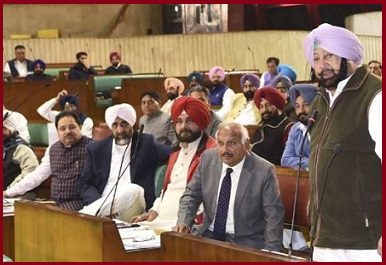 Punjab Legislative Assembly unanimously has passed a resolution for giving 30% reservation for women in Parliament and State legislative assembly.

The resolution was moved by Chief Minister Captain Amarinder Singh, urging the Centre to enact it. The bill would ensure the representation of men and women equally in the national electoral process.

The women Reservation Bill will ensure the balanced representation of women in electoral and decision-making process. The bill would reserve 180 seats out of 543 seats in Lok Sabha and 1370 seats out of 4109 seats in State Assembly.

Moreover, Punjab State will give more parole holidays for prisoners extending from 12 weeks to 16 weeks during the 550th birth anniversary celebration of Guru Nanak Dev.

Punjab and Jammu & Kashmir signed MoU on the Shahpur Kan...