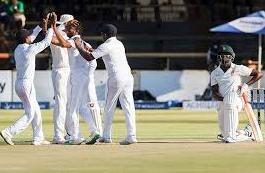 Upal Tharanga made half century and Asila Guraratne made 16 runs, both not out.

In the last bowl, Tharanga hit a four and a six to win and finished making 57 runs not out.

Angelo Mathews and Dinesh Chandimal did not play the match due to injury but Sri lanka rarely felt their absence.

Zimbabwe defeated West Indies on Friday match to play finals but could not win final match.