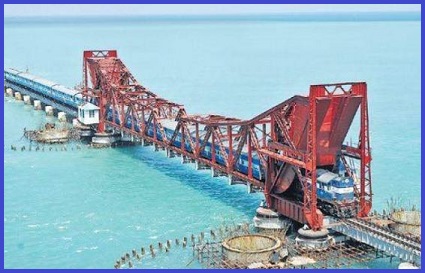 Indian Railways is building India’s first vertical-lift bridge to connect Rameswaram in the Arabian Sea to mainland India. This vertical bridge will allow ships and steamers to pass through without any hindrance.

The new vertical bridge would replace the existing 104-year-old Pamban bridge. It would be ready in the next four years.

The new vertical bridge will have a 63-meter stretch which will lift up while remaining parallel to the deck to allow access to the ships.

The lifting would be done using sensors at each end. The new bridge will have electro-mechanical controlled systems which will be interlocked with train control systems in place of existing manual operation and control.

Pamban Bridge connects the town of Rameswaram on Pamban Island to mainland India.

Pamban Bridge was the first sea bridge of India and was the longest sea bridge in India until the Bandra-Worli Sea Link was opened in 2010.