UAE after 6 years of suspension, reopens its embassy in Syria 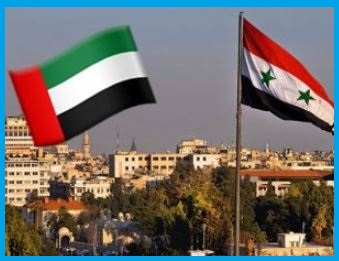 UAE after 6 years of suspension reopens its embassy in Syria: Details, Significance, Highlights

The United Arab Emirates (UAE) on 27th December 2018 has resumed its embassy in Damascus in Syria after six years of suspension.

This initiative of diplomatic services signals a thaw in the relations between the two countries, as also with the Arab world.

The Charge d'Affaires of the UAE Embassy began discharging his duty on 28th December 2018. The decision follows a careful reading of the latest developments and a conviction that the next phase requires Arab involvement to protect Syria’s sovereignty and territorial integrity.

Following suit is Bahrain, as the nation announced on 28th December 2018, that it will resume operations at its embassy in Syria, reflecting new efforts by Gulf Arab states to improve relations with President Bashar Assad as the civil war cools down.

The UAE had closed its Embassy and broke ties with Syria in February 2012, as the repression of nationwide protests demanding regime change was escalating into a devastating war.

The UAE government’s keenness to restore relations between the two brotherly countries to their normal course.

The resumption of relations will enhance and implement the Arab role in supporting the independence, sovereignty and territorial integrity of the Syrian Arab Republic.  It will also prevent the dangers of regional interference in Syrian affairs.