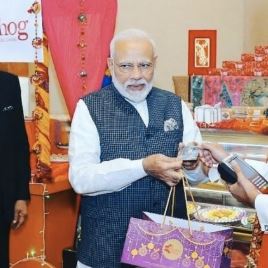 Prime Minister of India Narendra Modi, is on a two-day state visit to Bahrain from 24th August 2019. He becomes the first Indian Prime Minister to visit Bahrain ever.

While reaching, PM Narendra Modi was received with a guard of honor at the Bahrain airport and later held delegation-level talks with Bahrain PM Prince Khalifa Bin Salman Al Khalifa

The Zayed Medal is the highest civilian decoration of the UAE, which is awarded to kings, presidents, and heads of states.

The Zayed Medal was announced on 4th April 2019 while recognizing PM Modi's pivotal role in strengthening ties between UAE and India.

PM Modi also swiped the RuPay card to buy Indian sweets to offer as prasad at the Shreenathji Temple in Bahrain.

Note: PM Narendra Modi is currently on a three-nation tour to France, UAE, and Bahrain. He will return to France for the G7 summit between 25th August-26th August 2019.