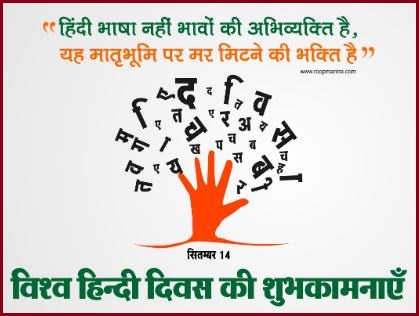 The World Hindi Day is celebrated every year on 10 January across India and Indian Embassy around the world.

On this occasion, Union Ministry of External Affairs (MEA) organises various special events to spread the greatness of the Hindi language through its missions abroad.

The first World Hindi Conference was organized in Nagpur on 10 January 1975 for the promotion of Hindi (Hindi) worldwide. Hence this day is celebrated as World Hindi Day.

The World Hindi Day was first celebrated on 10 January 2006 declared by the Former Prime Minister Dr. Manmohan Singh. It is in addition to present National Hindi Divas which is being observed on 14 September every year.

The World Hindi Day is the promotion of the language at the global stage. Whereas, National Hindi Divas is being observed across the country at national level.

The National Hindi Diwas is observed to mark adaptation of Hindi written in Devanagari script as the Official Language of the Union by the Constituent Assembly on 14 September 1949.

Hindi is the 4th most spoken language of the world. It is the mother tongue of around 258 million people across the world.

The provision of Hindi as the official Language of the Union has been mentioned in Article 120, Article 210 and Article 343, 344 and from 348 to 351. The Pacific island country, Fiji also has adopted Hindi as an official language.

10th january: World Hindi Day celebration all around the World

10th january: World Hindi Day celebration all around the Wor...

» 10th january: World Hindi Day celebration all around the World