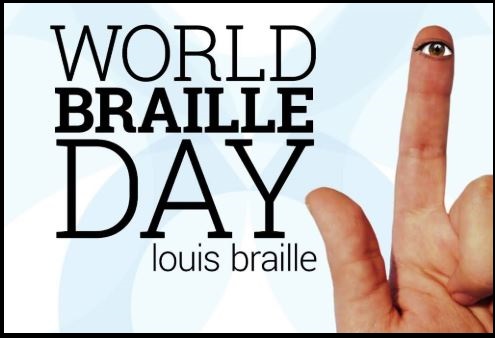 United Nations celebrated the first ever official World Braille Day remembering the birth anniversary of Louis Braille who was the inventor of Braille for the people with visual disabilities.

World Braille Day is observed annually on 4th January around the world, to raise awareness on the importance of Braille for approximately 1.3 billion people living with some form of distance or near vision impairment.

The proclamation for the celebration of World Braille Day was made by the United Nations General Assembly as a means for realising the human rights of visually-impaired and partially-sighted people, and bringing written language to the forefront as a critical prerequisite for promoting fundamental freedoms.

Louis Braille was born on 4th January 1809 in France and he lost his vision at the age of 3 years.

On the occasion of World Braille Day, half part of evening bulletin of All India Radio – Ahmedabad was read by a Visually challenged primary school teacher, Mr. Krishnabhai Thakar.