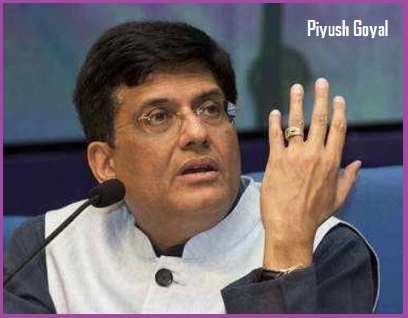 Piyush Goyal full name 'Piyush Vedprakash Goyal' is an Indian politician from Bhartiya Janta Party (BJP). Currently, he is serving as Minister of Railways and MoS of Coal, Power and Renewable Energy of India.

Piyush Goyal was born on 13 June 1964 to Ved Prakash Goyal and Chandrakanta Goyal in Mumbai, Maharashtra. His father was a BJP treasurer and Union Minister for shipping in the Vajpayee government. His mother was a member of the Maharashtra legislative assembly.

Piyush Goyal was a chartered accountant by profession, before becoming a member of Rajya Sabha. He worked as an investment banker. Later, he joined the Bharatiya Janata Party (BJP) in 1984.

During his career as a member of BJP, he occupied many important positions. He was also the member of the Bharatiya Janata Yuva