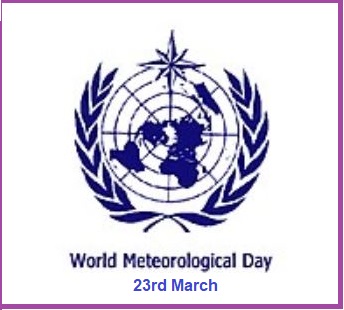 World Meteorological Day was first celebrated on the 23rd of March every year since 1961.

On this day in 1950, the World Meteorological Organisation (WMO) Convention came into force that aimed at creating WMO. Later in 1951, WMO became United Nations specialized agency for meteorology, geophysical sciences, and operational hydrology.

World Meteorological Day 2019, the theme is: “The Sun, the Earth and the Weather”.

World Meteorological Day 2019 theme majorly focus on the importance of Sun and how it helps to sustain life on earth, changes the weather, hydrological cycle, and ocean currents. It will be celebrated by various activities conducted across the globe.

WMO is an intergovernmental organization whose mandate covers weather, climate and water resources. It is UN specialized agency for meteorology, operational hydrology, and related geophysical sciences

WMO is dedicated to international cooperation and coordination on state and behavior of Earth’s atmosphere, its interaction with land and oceans, the weather and climate and distribution of water resources.

WMO has 191 Member States and Territories. It originated from the International Meteorological Organization (IMO), which was founded in 1873. It has its headquarters in Geneva, Switzerland.

WMO statement: Year 2017 recorded as one of top 3 hottest years

» WMO statement: Year 2017 recorded as one of top 3 hottest years