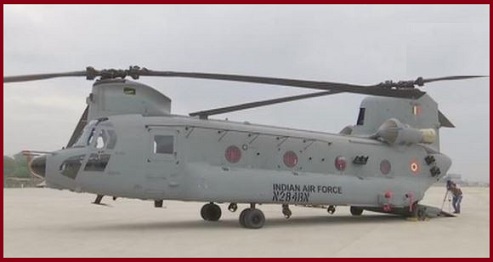 The first four heavy lift 'CH-47F (I)' Chinook helicopters out of 15 were inducted in the Indian Air Force (IAF), at Air Force Station, Chandigarh, in Squadron No 126 Helicopter Flight.

The CH-47F (I) Chinook is an advanced multi-mission helicopter with multi-role that will act as life-saver during HADR (humanitarian assistance and disaster relief) missions.

The CH-47F (I) Chinook helicopters are regarded as one of the most modern heavy lift choppers, the payload capacity of Chinook is about 10 tonne,as it is able to lift artillery, vehicles, road construction, and engineer equipment as well as troops and supplies to mountainous sectors.

India has purchased 15 Chinooks for $1.5 billion on the lines of Indo-US deal inked in September 2015. The delivery of remaining helicopters is expected to be completed by 2023.