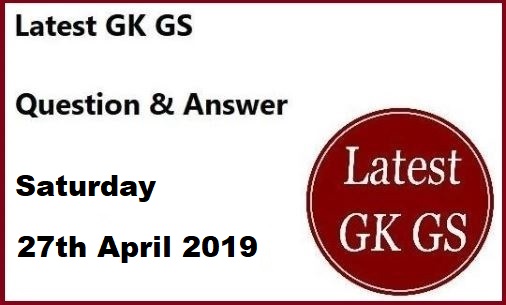 1. When the World Veterinary Day is celebrated every year?

2. What did India's ICMR unveil to eliminate malaria from India by 2030?

3. What did the Home Ministry distribute to states and UTs to collect evidence on sexual assault cases?

4. Who named Indian envoy to Seychelles

6.  When the World Intellectual Property Day is celebrated every year?

9. Which country has initiated the step towards listing giraffes as threatened species?

10. Which Indian Institute became the only one to feature in QS EMBA Rankings 2019

11. Which country’s foreign plastic waste ban has thrown the world’s plastic recycling sector into chaos?
Ans:- China
12. When is the World Day for Safety and Health at Work celebrated?
Ans:- 28th April