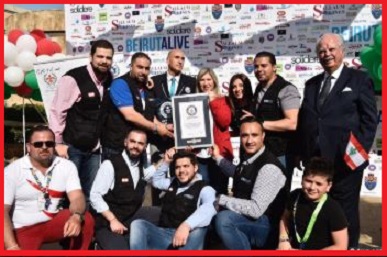 Lebanon’s capital Beirut has set a new Guinness World Record for the most number of national flags displayed in one city for 24 hours.

By raising a total of 26,852 Lebanese flags for 24 hours Beirut broke the record of New York’s Waterloo of raising 25,599 flags.

This was achieved by individual and national initiative undertaken by The Beirut Alive Association. The event was organized under the patronage of Lebanon's Prime Minister Saad Hariri.

Guinness World Record was originally known as The Guinness Book of Records from its inception from 1955 until 2000.

India about to enter Guinness World record for cooking ...