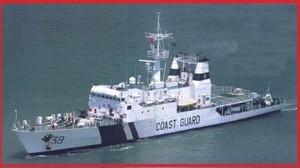 The Indian Coast Guard ship (ICGS) Vigraha was decommissioned at Visakhapatnam, Andhra Pradesh. The decommissioning ceremony was attended by eight former Commanding Officers who had been at the helm of the ship, along with former and the present crew.

About ICGS Vigraha is a frontline offshore patrol vessel (OPV). It was commissioned into service on April 12, 1990. It has played an instrumental role in protecting the east coast of India for 29 years of service from 1990 to 2019.

ICGS Vigraha was the seventh OPV built by Mazagaon Dock Ltd, Mumbai. It was first of its class among other OPVs of the third series. It was later based at Visakhapatnam and since then it had been instrumental in protecting the east coast in general and Andhra Pradesh coast in particular.

ICGS Vigraha was also leased to Sri Lankan Navy on a dry lease from August 2008 to January 2011. Later, it was re-inducted into Indian Coast Guard (IGC) in January 2019 after which it was continuously based at Visakhapatnam.

ICGS Vigraha played an important role in the execution of assigned missions in seafronts of Coast Guard Regions where ever it was based like of Mumbai in West, Porbandar in North West and Visakhapatnam in East.

ICGS Vigraha has been instrumental in saving many lives at sea and also helped in apprehending many poachers and smugglers. It most prominent laurel was 275 kg silver haul.