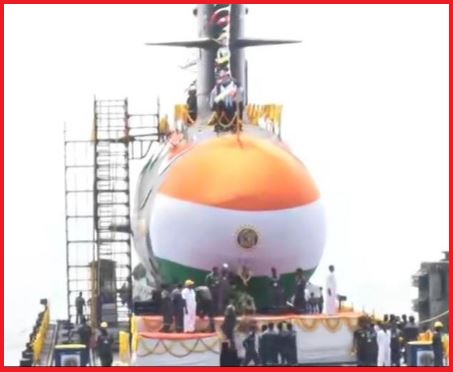 Indian navy's new Scorpene Class Submarine 'INS Vela', equipped with modern machinery and technology to guard the seas, was launched on 6th May 2019 at the Kanhoji Angre Wet Basin of Mazagon Dock Limited at Mumbai, Maharashtra.

Scorpene Class Submarine 'INS Vela' will now undergo rigorous trials and tests in both harbor and sea phases before induction into the Indian Navy.

Scorpene Class Submarine 'INS Vela' has been named after an earlier lead submarine of the erstwhile Vela class, which was the second batch of the Foxtrot class submarines acquired from erstwhile Union of Soviet Socialist Republics (USSR).

INS Vela was first commissioned on 31st August 1973, in the Indian Naval service and continued to serve for 37 years. It was the oldest submarine of the country when it was decommissioned on 25th June 2010.

INS Kalvari, the first of the Scorpene-class submarines, was commissioned by Prime Minister Narendra Modi on 14th December 2017.

INS Khanderi, the second of the 6 Scorpene Class Submarines, will soon be inducted into the Indian Navy by May 2019.

INS Karanj was launched by the Indian Navy on 31st January 2018 and is in the advanced stage of trials.

Fifth and Sixth submarines 'INS Vagir' and 'INS Vagsheer' are in advanced stages of manufacturing.