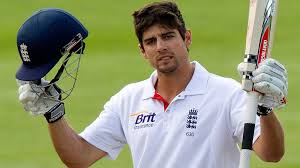 Alastair Cook of England becomes the sixth batsman to score 2000 runs against India in the fourth test between India and England held at Wankhede Stadium in Mumbai.

In the past, Ricky Ponting and Michael Clarke of Australia, Clive Lloyd and Shivnarine Chanderpaul of West Indies and Javed Miandad of Pakistan have achieved this feat.

India had their backs to the wall from that point onwards, eventually losing the test

His approach in the current series as a batsman (and captain) has been questionable; one feels he has gone too much into a shell facing the Indian spinners.

Cook was eventually prized out by Ravindra Jadeja for 54, having spent over 200 minutes at the crease and faced nearly 200 balls.

Cook has looked woefully short of imagination and confidence in this series.