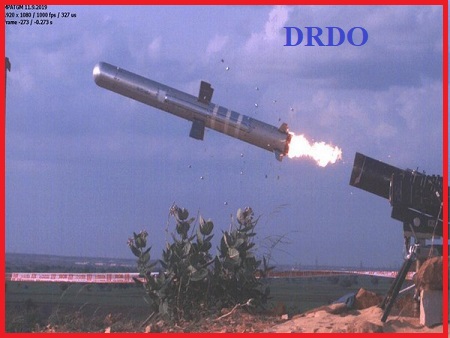 This Man-Portable Anti-Tank Guided Missile (MPATGM) system is the third series and to be inducted in the Indian Army soon.

As per the DRDO officials, the MPATGM missile system was launched from a man-portable Tripod launcher and the target was mimicking a functional tank and met all the testing parameters.

The Man-Portable Anti-Tank Guided Missile (MPATGM) is an indigenous missile which is based on the fire-and-forget system.

MPATGM system has been developed by DRDO in partnership with Bharat Dynamics Limited.

MPATGM system can hit a target up to 2.5 km; it is equipped with an advanced Imaging Infrared Radar (IIR) with state-of-the-art avionics.

After that, DRDO test-fired this missile for the first time on 13 March 2019 and the second test was conducted on 14 March 2019 in the Rajasthan desert.