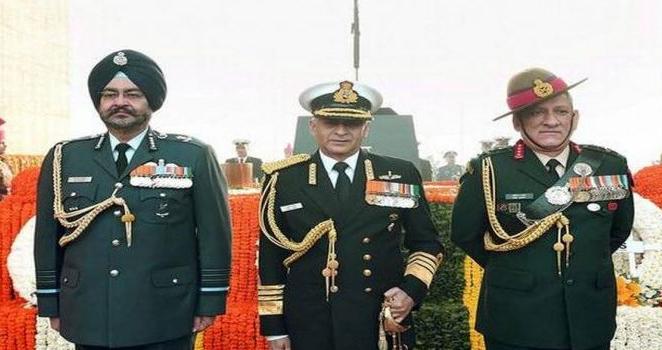 The first proposal for a CDS in India came from the 2000 Kargil Review Committee (KRC), which called for a reorganization of the apex decision-making and structure and interface between the Ministry of Defense and the Armed Forces Headquarters.

The Group of Ministers Task Force that studied the KRC report proposed to the cabinet committee on security that a CDS, who would be five-star officer, be created.

In preparation for the post, the government created the Integrated Defense Staff (IDS) in late 2002, which was to eventually serve as the CDS' Secretariat. However, over the past 17 years, this has remained yet another department within the military establishment.

India has had an equivalent post known as the Chairman, Chief of Staff Committee (CoSC), but this office lacks effectiveness because of its structure.

The senior-most among the three service chiefs is appointed as the head of the CoSC. With the chief's retirement, the office terminates.

The current chairman of the CoSC is Air Chief Marshal Birender Singh Dhanoa. BS Dhanoa will retire at the end of September.

Defense: Now Ex-Servicemen Of Assam Rifles To Get Echs Benefit

Defense: Retired soldiers from the Assam Rifles will now be ...

Japan conducted first ever submarine drill in the disputed S...

India Naval Ship Satpura and Kadmatt participating in the Pa...

» Defense: Now Ex-Servicemen Of Assam Rifles To Get Echs Benefit

» CFRTI determined that PET bottles are safe after study

» GI Tag: Odisha gets Geographical Indication Tag for its own Rasagola