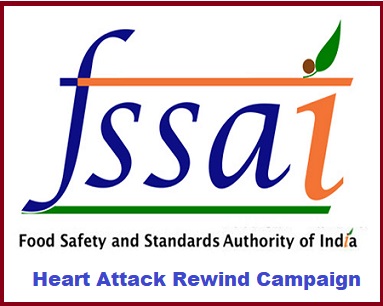 This Heart Attack Rewind campaign will support FSSAI’s global target of eliminating trans-fat in India by 2022, a year ahead of global target by World Health Organization (WHO).

This Heart Attack Rewind campaign is the first mass media campaign of its kind that will educate consumers about the harmful effects and its link to cardiovascular diseases.

This Heart Attack Rewind campaign also warns citizens about the health hazards of consuming trans-fat and offers strategies to avoid them through healthier alternatives. The campaign was developed by experts at Vital Strategies.

Globally, trans-fat intake leads to more than 500,000 deaths from cardiovascular disease every year. Trans-fat is made by adding hydrogen to liquid vegetable oils to make them more solid and to increase the shelf life of foods.

In May 2018, WHO launched a comprehensive plan to eliminate industrially produced trans-fat from global food supply by 2023.

About Food Safety and Standards Authority of India (FSSAI)

FSSAI is a nodal statutory agency responsible for protecting and promoting public health in India through regulation and supervision of food safety.

Established: Under the Food Safety and Standards Act, 2006

Works:  Under the shield of Union Ministry of Health & Family Welfare

» Union Cabinet approved setting up of Medical College at Silvassa

» Pneumonia threatens death of 17 million children in India by 2030