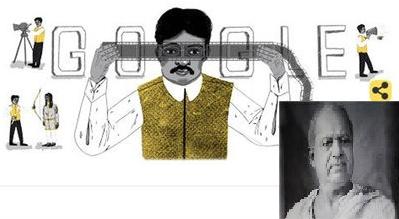 Google’s doodle has been developed and designed by guest artist Aleesha Nandhra. It shows a young Dadasaheb in action as he went about directing the first few gems in the history of Indian cinema.

Dadasaheb Phalke was born on 30th April 1870 to a family of scholar father in Trimbak (Nashik district), Maharashtra. He died on 16th February 1944, at an age of 73 years in Nashik.

Dadasaheb Phalke took education from JJ School of Art of Mumbai in the year 1885. He also had a keen interest in the arts and studied at various points, photography, lithography, architecture, engineering, and even magic.

Dadasaheb Phalke in his career spanning for 19 years contributed to 95 movies and 27 short films till 1937.

In his honor, the Indian government had established ‘Dadasaheb Phalke Award’ in the year 1969, as India's highest award in cinema.

Dadasaheb Phalke Award was first awarded to Indian actress Devika Rani in the year 1969. It was last accorded posthumously to Late Veteran Actor Vinod Khanna in the year 2018.