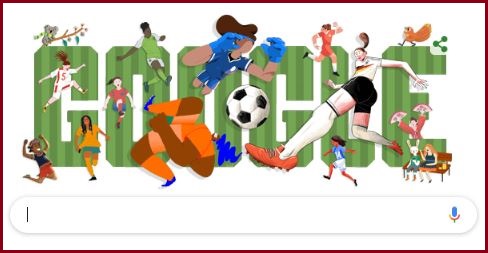 Google on 7th June 2019 (Friday), celebrates the beginning of the 2019 Women’s World Cup in France with a doodle.

Today, Google doodle is created around the teams participating in the football mega event. The caricature, Google notes, celebrates the 8th edition of the tournament with a collage of characters from its upcoming series of doodles by guest artists representing each of the competing countries.

The FIFA Women’s World Cup 2019 opening match will take place at Parc des Princes in Paris on 7 June 2019 (Friday) and the Final will be hosted at the Stade de Lyon in Lyon on 7 July 2019 (Sunday).

A total of 52 matches will be played to determine the winner of the FIFA Women's World Cup 2019 in France. The final draw for this competition was held on 8 December 2018 at the Seine Musicale.

Four teams will be making their Women’s WorldCup debut in 2019: Chile, Scotland, South Africa, and Jamaica–the first Caribbean team ever to qualify.

The FIFA Women’s World Cup competition has been held every four years since 1991, the inaugural tournament, was held in China.