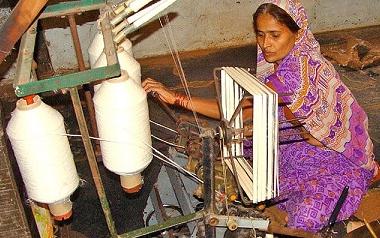 Union Ministry of Micro, Small and Medium Enterprises (MSME) on 4th September 2018 approved proposal by the Khadi and Village Industries Commission (KVIC) to increase the wages of artisans by over 36 percent.

The Khadi artisans wages will be increased from Rs 5.50 per hank previously to Rs 7.50 per hank.

This proposal for the increase in wages to Khadi spinners, along with payment of government subsidy Modified Market Development Assistance (MMDA), will be implemented with effect from 15th August 2018.

The increment in wages of artisans is believed to draw youth towards taking up spinning as a profession. This increase will also attract new and younger artisans to Khadi Industry.

Under the MMDA programme, 30 percent of the prime cost is paid to the Khadi institutions as production subsidy.

The wage incentives are paid by Khadi and Village Industries Commission directly to the accounts of the artisans through direct benefits transfer.

» Apple start working for Make in India initiative in April 2017