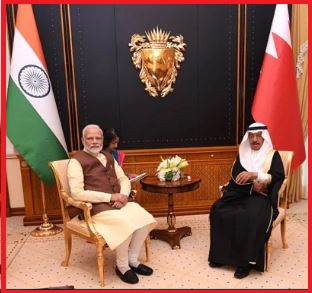 Prime Minister of India Narendra Modi, reached to Bahrain on a two-day state visit on 24th August 2019. He received with a guard of honor at the Bahrain airport.

On the occasion, India and Bahrain signed 4 Key Agreements in the fields of Culture, Space, Solar alliance.

1. ISRO and Bahrain's National Space Science Agency will collaborate in the area of space technology

2.  India and Bahrain agreed on the collaboration of the Kingdom with the International Solar Alliance (ISA).

4. India and Bahrain also signed MOU on the roll-out of RuPay card.

India and Bahrain have had economic and trade relations for several centuries.

Bahrain's investment in India amounts to 173 billion dollars through FDI.