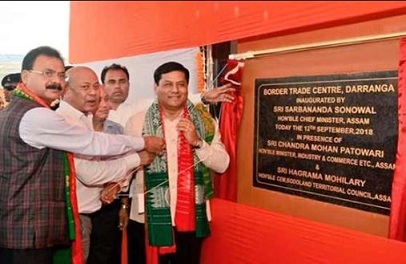 Indo-Bhutan Border Trade Centre inauguration is a spontaneous response of the people of Assam, especially the people residing in the four BTAD districts of Baksa, Udalguri, Chirang, and Kokrajhar, to the prevailing peaceful situation in the state.'

Indo-Bhutan International Border Trade Centre project construction was started in 2011 after when it was approved in 2010. '

Assam CM Sarbananda Sonowal thanked both Bhutan and Bangladesh for opening their consulates at Guwahati which has given a renewed thrust to the relations with the neighboring countries with Assam. He further vowed to strengthen bilateral relation of India with ASEAN and BBIN countries.

Assam CM also announced that construction work of the Rupsi Airport in Dhubri would be started in October 2018.