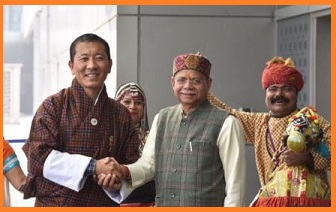 Prime Minister of Bhutan Lotay Tshering arrived in India on 27th December for a three-day visit. This is significant because it is taking place during the Golden Jubilee year of the establishment of formal diplomatic relations between the two countries.

The Bhutanese PM Tshering was accorded ceremonial reception at the forecourt of Rashtrapati Bhavan. He would pay homage to Father of the Nation Mahatma Gandhi and hold talks with Prime Minister Narendra Modi.

The India-Bhutan bilateral relations are governed by the Treaty of Friendship and Cooperation signed in 1949 between the two countries. The treaty was revised in February 2007. The India-Bhutan Friendship Treaty together with reflecting the contemporary nature of our relationship lays the foundation for their future development in the 21st century.

The Golden Jubilee of the establishment of formal diplomatic relations between India and Bhutan is being celebrated in the year 2018.

» UK will support India for 'unconditional' membership of NSG