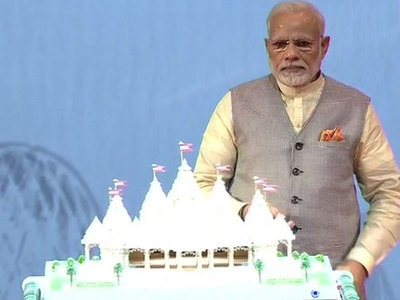 PM Narendra Modi laid the foundation stone for the BAPS Swaminarayan temple via video conferencing from the Dubai Opera House, where he addressed the members of the Indian community.

PM Modi also thanked Crown Prince of Abu Dhabi Mohamed bin Zayed Al Nahyan on behalf of 125 crore Indians for the construction of the grand temple in the Gulf emirate.

The UAE government had allocated land for the temple during PM Modi’s first visit to the Gulf country in 2015.

The temple on 55,000 square metres of land includes idols of Lord Krishna, Lord Maheshwara, Lord Ayyappa and more.The temple will also feature a garden and a water-front. It will be hand-carved by Indian temple artisans and assembled in UAE

The temple design and structure will be on grounds of the Akshardham temples in India.It will incorporate all aspects and features of a traditional Hindu temple as part of fully functional, social, cultural and spiritual complex.

The BAPS Swaminarayan Sanstha - the Gujarat-based organisation is building and managing the temple. The construction of the temple is believed to cost approx Dh400 million (699 crore Indian Rupees) and should be finished by 2020.