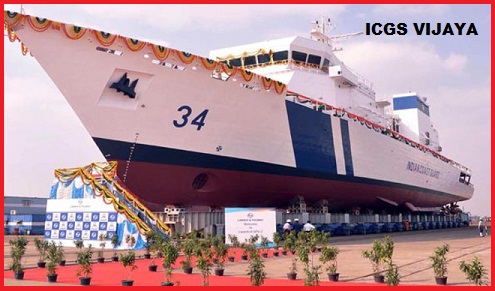 ICGS Vijaya has been designed and built indigenously by Larsen & Toubro (L&T).

ICGS Vijaya is the 98-meter long ship. It can carry one twin-engine helicopter and four high-speed boats, including two inflatable boats for boarding.

After commissioned ICG fleet, ICGS Vijaya will be based at Paradip, Odisha. It will be manned by 12 officers and 91 men.

ICGS Vijaya will be deployed extensively for Exclusive Economic Zone surveillance and other duties as enshrined in Coast Guard charter.

ICGS Vijaya will also give a fillip to the maritime protection of Eastern seaboard in general and the maritime states of Odisha and West Bengal in particular. It is also capable of carrying limited pollution response equipment to contain an oil spill in the sea.