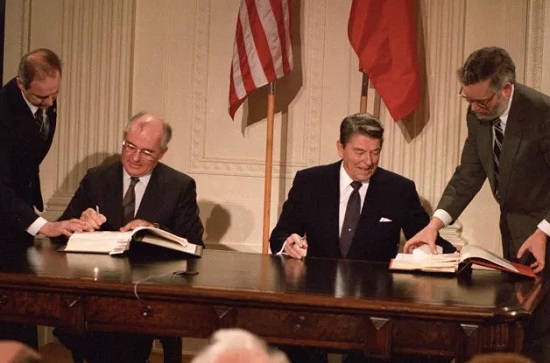 Intermediate-Range Nuclear Forces Treaty (INFT) Features, History, Donald Trump Decision to get away from the Treaty with Russia

US President Donald Trump announced on October 20, 2018, that the US will be separated from the Intermediate-Range Nuclear Forces (INF) Treaty with decades of Russia.

Donald Trump told reporters before leaving for a rally in Nevada. He accused Russia of violating the treaty. Under this treaty, there is a mechanism to end a certain class of nuclear weapons.

This treaty helps protect America and Europe and its allies in the Far East.

The treaty prohibits the creation of a cruise missile left from the land killing 300 to 3,400 miles to the United States and Russia. It includes all land-based missiles.

The duration of the medium-range nuclear power (INF) treaty is to end in the next two years.

The duration of the medium-range nuclear power (INF) treaty is to end in the next two years.

Russia's Foreign Ministry said that America's move to separate from the historic nuclear deal with Russia was inspired by the dream of becoming a global powerhouse alone.

The treaty signed in 1987 by President Mikhail Gorbachev of the then Soviet Union and Ronald Reagan of America, banned the construction, deployment and testing of ballistic and cruise missiles, which range between 483 kilometres and 5,472 kilometres and land-launch.

The NATO ministers issued a joint statement saying that the INF agreement is "crucial for Euro-Atlantic security and we are fully committed to protecting this historic arms control".