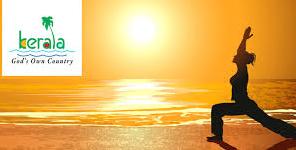 'Yoga Ambassadors Tour', a specialized trip for yoga professionals from around the world, part of Kerala government's tourism promotion programme, was inaugurated by Minister of State for AYUSH Shripad Yesso Naik.

The 10-day educational tour for yoga professionals has been organized by the Association of Tourism Trade Organizations (ATTOI) in association with the Ministry of AYUSH and Kerala Tourism department.

"The objective of the tour is to familiarise one with the concept of yoga in Kerala and connect different destinations with yoga in different parts of the state," informed PK Anish Kumar, President of ATTOI.

The tour will conclude on International Yoga Day on June 21 at Kochi.

The delegates include Yoga tour operators, Wellness Magazine professionals and Yoga Teachers from across the world.

Around 60 yoga exponents from 22 countries are participating in the Yoga Ambassador Tour.