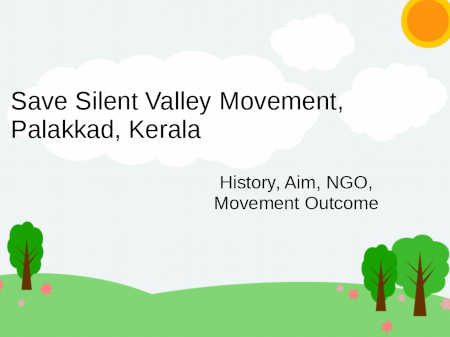 Long before the Internet era, a remarkable people's movement saved a pristine moist evergreen forest in Kerala's Palakkad District from being destroyed by a hydroelectric power project.

This movement was lead by an NGO name Kerala Sastra Sahitya Parishad (KSSP) an NGO, and the poet-activist Sughatha kumari.

Why did the Silent Valley movement happen?

1970: the Kerala State Electricity Board (KSEB) proposes a hydroelectric dam across the Kunthipuzha River that runs through Silent Valley, which will submerge 8.3 sq km of untouched moist evergreen forest.

February 1973: The Planning Commission approves the project at a cost of about Rs 25 crores. However, due to a lack of sufficient funds, implementation is delayed.

1973: Protests begin to mount against the project.

Kerala government, News Media, Electricity board are in support of the hydroelectric plants.

But Ecologists alert them that the project can destroy 10% of the ecosystem and some species.

• November 1983: the Silent Valley Hydroelectric Project is called off.

» Arif Mohammad Khan is the new Governor of Kerala

» Chipko Movement 1973: Cause, Effect and Result