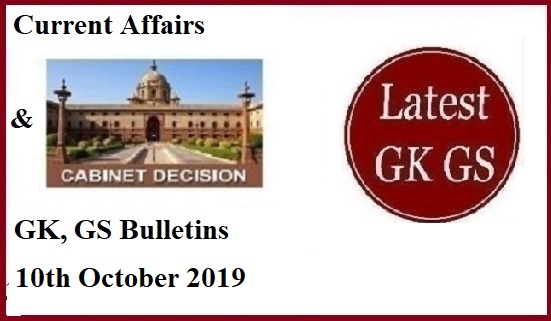 1. Modi 2.0 cabinet gave approval for the relaxation of Aadhaar seeding of data of the beneficiaries under PM-Kisan

Approval was given for the relaxation of the mandatory requirement of Aadhaar seeded data as a pre-condition for the release of funds to the beneficiaries under the Pradhan Mantri Kisan Samman Nidhi (PM-Kisan) scheme till 30th November 2019.

2. Modi 2.0 cabinet gave approval for MoUs signed between India and Foreign Broadcasters in the field of radio and television

Approval was given to the Memorandum of Understandings (MoUs) signed between India and Foreign Broadcasters in the field of radio and television that will help public broadcasters in exploring new visions; New Strategies to address the demands of new technologies and stiff competition; Media liberalization and globalization.

3. Modi 2.0 cabinet gave approval for apprising of the progress under NHM and decisions of the EPC and MSG of NHM

Approval was given for the apprise of the progress under the National Health Mission (NHM) and its decisions of the Empowered Programme Committee (EPC) and Mission Steering Group (MSG) of the NHM.

4. Modi 2.0 cabinet gave approval to 5% hike in DA/DR for central government employees and pensioners from 12% to 17%

On the recommendations of the 7th Central Pay Commission (CPC), an approval was given to release an additional installment of Dearness Allowance (DA) to Central Government employees and Dearness Relief (DR) to pensioners with effect from 01.07.2019 representing an increase of 5% over the existing rate of 12% of the Basic pay/Pension to 17%, to compensate for price rise.

Approval was given for the inclusion of 5,300 Displaced Persons (DP) families of Jammu & Kashmir (J&K)- 1947 who initially opted to move outside the state of J&K but later on returned and settled in the state of J&K, in the Rehabilitation Package approved by the Cabinet on 30.11.2016 for Displaced Families PoJK and Chhamb under the Prime Minister’s (PM) Development Package 2015 for J&K.