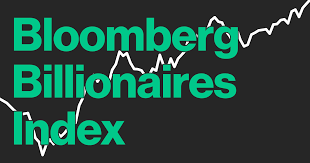 According to Bloomberg Billionaires Index, released on 2nd April 2018, Reliance Industries, Chairman and MD, Mukesh Ambani has been ranked 19th to become the third richest person in Asia.

As per the Bloomberg’s Index list of world wealthiest person, Mukesh Ambani has now become the richest person in India and 3rd richest Asian with a net worth of approx $38.3 billion, his wealth is peg-topped at about over 1.5 percent of India’s GDP.

According to Bloomberg Billionaires Index 2018, apart from Mukesh Ambani, four other Indians have made it to the top 100 Index list are:

Total there are 24 other Indians who featured on Bloomberg Billionaires top 500 Index list, which was released on 2nd April 2018.

Alibaba's Jack Ma is Asia's richest person (Rank 1st) with a net worth of $47.2 billion followed by Tencent Co-founder and CEO Pony Ma with approx $41.1 billion net worth.

Mukesh Ambani sets up Estonian JV for e-governance, takes up...

List of Top Five Billionaires of India 2018 Mukesh Ambani, A...

Reliance company Jio has made a record by adding 1000 custom...