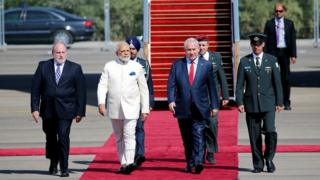 According to Narendra Modi, India is much close to Israel to protect their strategic interests and also cooperate to fight growing radicalization.

He also anounced that they regard thriving two-way trade and investment which will flow as the bed-rock of a strong partnership of India and Israel.

India and Isarel agreed to fight against forces of terror.

India and Israel have signed seven agreement including agreement between ISRO (Indian Space Research Organization) and Israel Space Agency and The Ganga agreement.

The agreements are signed between India and Israel over Industrial Development, Water Conservation, Water management, Agriculture, agreement, atomic power energy, GEO-LEO Optical Link and agreements over satellites have been signed.