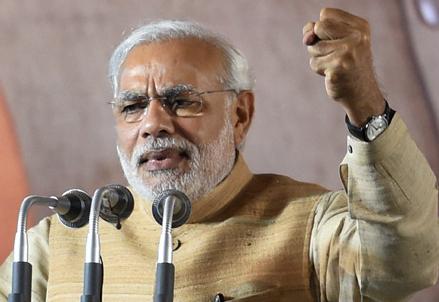 Prime Minister Narendra Modi has been ranked 9th on Forbes' 2018 list of 'the world's most powerful people'.

The only other Indian to feature on the list is Reliance Industries Chairman Mukesh Ambani at 32nd rank.

According to the Forbes-2018 list, PM Narendra Modi ranks ahead of Facebook CEO Mark Zuckerberg who is at the 13th spot.

As per the Forbes, “There are nearly 7.5 billion humans on planet Earth, but these 75 men and women make the world turn. Forbes’ annual ranking of The World’s Most Powerful People identifies one person out of every 100 million whose actions mean the most.”

Narendra Damodardas Modi (67 years old) is the 15th Prime Minister of India who assumed PM's office in May 2014. He led the Bhartiya Janata Party (BJP) to a massive victory for the first time in Lok Sabha elections in 2014.

PM Narendra Modi also served as the Chief Minister of Gujarat from 2001 to 2014. He has also been an active member of the Rashtriya Swayamsevak Sangh in the past.

PM Narendra Modi is very popular on Social Media and enjoys a huge following on various platforms like Twitter. His wax statue was installed at the Madame Tussaud's Museum in London.

Forbes is an American business magazine, founded in the year 1917. It is headquartered in New York City, New York, United States.