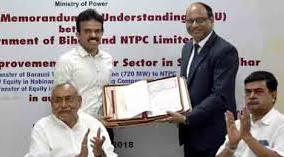 The MoU envisioned in transferring of three power generation facilities in Bihar to NTPC. It has been undertaken as a part of NTPC’s strong capability in turning around under-performing state-owned power stations.

All three power generation facilities are devised to be transferred to NTPC through Statutory Transfer Scheme. The transfer of these power stations to NTPC will result in their optimal and efficient utilization, bring power tariff down and benefit people of Bihar state.

NTPC is the largest power generating company of India with total installed capacity of 53651 MW (including JVs) from coal, gas, hydro, solar and wind power projects.

NTPC is one of the seven maharatna company in India functioning under the Ministry of Power.