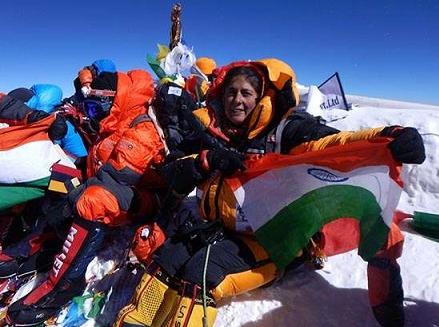 India’s Sangeeta Bahl has registered her name as the oldest woman to scale the world highest peak of Mount Everest from Nepal side on 19th May 2018 with the help of two Sherpas.

Sangeeta Bahl (53-year-old) is a former model and entrepreneur from Jammu and Kashmir, who currently resides in Gurugram, Haryana.

Sangeeta Bahl after her feat was facilitated at the Indian embassy in Kathmandu on 27th May 2018. Her husband Ankur Bahl, who climbed Mt Everest in 2016, was also welcomed at the embassy.

Earlier, Sangeeta Bahl has already conquered six out of the seven highest peaks of the world. She broke the record of Premlata Agarwal, 48, who conquered Mount Everest on 20th May 2011.

Sangeeta Bahl’s mission also had a message: she carried a banner to the peak advocating early detection of breast cancer in women, and funding for the same.

This was Sangeeta’s second attempt to scale the mountain. She abandoned the first expedition after suffering from high-altitude sickness.

According to officials, 6 dozen Indian nationals have scaled Mt Everest this year, becoming the second nation of mountaineers to do so after climbers from the US.

Shivangi Pathak, 16, from Haryana became India’s youngest woman to climb the Everest from Nepali side on 18th May 2018.