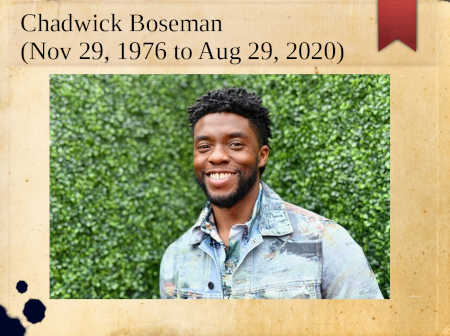 Chadwick Boseman was born on November 29, 1976, in Anderson, South Carolina. Chadwick Boseman played many famous and historical roles like Jackie Robinson in 42(2013), James Brown is getting on up(2014). He recently Best Known for his Acting as Black Panther in marvel cinematic universe movies, Civil war, Infinity war, End game, and Black panther.

Boseman was the only child of their African American parents, Carolyn and Leroy. His parents encouraged him to pursue his passion for acting. after completing his studies Boseman started his career as an actor in many TV programs. His mother was a nurse, and his father worked at a clothing firm and even operated a padding industry. Boseman graduated from T. L. Hanna High School in 1995. In his junior year, he wrote his first play, Crossroads, and staged it at the school after a classmate was shot and killed.

Boseman was awarded an undergraduate degree in Fine Arts at Howard University in Washington, D.C., in 2000.

At the beginning of his career, he lived in Brooklyn. Boseman participated in the Schomburg Junior Scholars Program at the Swomburg Black Culture Study Centre, in Harlem, New York as a drama mentor. In 2008, he went to Los Angeles to work as an actress.