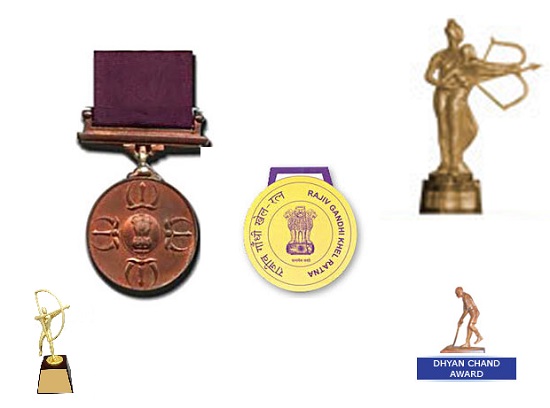 Rajiv Gandhi Khel Ratna is the biggest sports award given to India. This award has been named after the former Prime Minister of India, Rajiv Gandhi. The award is given to a medal, a citation and a reward of seven and a half million rupees. This award was established in the year 1991-92.

This award is conferred to coaches for lifting medal winners in prestigious international sports events and for lifetime contribution in game development. The award was made in the year 1985. Under the Dronacharya award, a statue, certificate, traditional dress of Guru Dronacharya and cash prize of five lakh rupees is given.

This award is given for the best performance for four consecutive years. This award was established in the year 1961. As a reward, the amount of five lakh rupees, the bronze statue of Arjuna and a citation are given.

This award is the highest award in life for lifetime achievement in the year 2002. This award is named after the great Indian hockey player Dhyanchand. Those who receive this award are given a statue, certificate, traditional costume and cash of five lakh rupees. More than three players are honoured each year with this award.