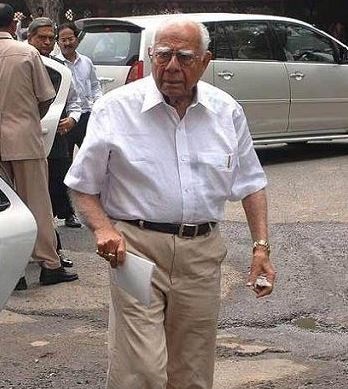 Indian famous lawyer, politician and former Union Minister Ram Jethmalani on 8th September 20019, passed away at the age of 95 years in New Delhi. He died due to age-related illness.

Ram Jethmalani has an eminent record of handling high profile law cases being a 'Criminal' lawyer. He was the highest-paid lawyer in the supreme court of India.

Ram Jethmalani completed LL.B. degree at S.C. Shahani Law College, Karachi with a first-class of marks at the young age of 17. Later, he received an LL.M degree also.

Ram Jethmalani had served as India's Union Law Minister, Development Minister, Member of Parliament and as chairman of the Bar Council of India.

Ram Jethmalani was a Member of Parliament, Rajya Sabha from 8 July 2016 to 8 September 2019 till his death.

Ram Jethmalani was honored with International Jurist Award and in 1977 Human Rights Award instituted by World Peace Through Law for his fight against authoritarianism in the Philippines.