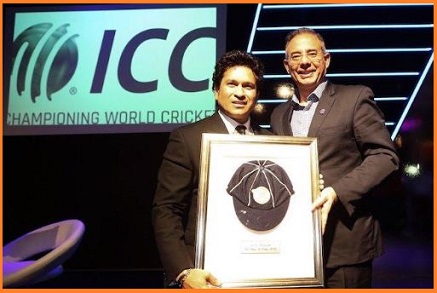 With this, Sachin Tendulkar became the 6th Indian cricketer to be inducted into ICC’s Hall of Fame after Bishen Singh Bedi, Kapil Dev, Sunil Gavaskar, Anil Kumble, and Rahul Dravid.

The ICC Hall of Fame was launched on 2nd January 2009, in association with the Federation of International Cricketers Associations (FICA), as part of ICC's centenary year celebrations.

From 2009, ICC began inducting a select group of names to the Hall of Fame every year. Three Indians- Bishan Singh Bedi, Sunil Gavaskar, and Kapil Dev were announced as the new members of the Hall of Fame in the first such induction in 2009.

Rahul Dravid was inducted into the ICC Hall of Fame in 2018 along with former Australian skipper Ricky Ponting and England Women wicketkeeper-batter Claire Taylor. Anil Kumble was given the honor earlier in 2015.