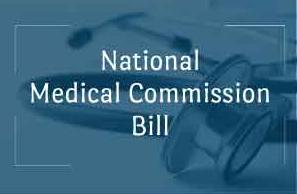 The Union Cabinet chaired by PM Narendra Modi on 28th March 2018, has approved the amendments to the National Medical Commission (NMC) Bill, considering on the recommendations of Department Related Parliamentary Standing Committee (DRPSC) and general feedback from the public.

The NMC bill approved that include strict action against quackery, removing a controversial proposal for a bridge course that would have allowed non-allopathic doctors to practice modern medicine and regulating fees for 50% of the seats at deemed universities.

The NMC bill is believed to replace the Medical Council of India as the top medical education regulator in India.

The NMC bill has retained a plan to conduct the final MBBS examination as a common exam nationwide. This exam will also serve as an exit test called the National Exit Test (NEXT), which will allow students to get a license to practice without having to appear in a separate exam after MBBS.

The NEXT would also serve as the screening test for doctors with foreign medical qualifications to practice in India.

The NMC bill amendments proposed is also to increase the punishment for unauthorized practice of medicine to up to one year in jail and a fine of up to Rs 5 lakh.

The NMC bill amendments also proposed to boost the nominees of States & Union Territories in the commission from 3 to 6 members, agreeing to the demand from states to increase their representation.

The NMC bill was proposed to the parliamentary standing committee on January 2, after doctors’ associations objected to some of its clauses in actual version.

» All You Need To Know About Ayushman Bharat: National Health Protection Mission Scheme