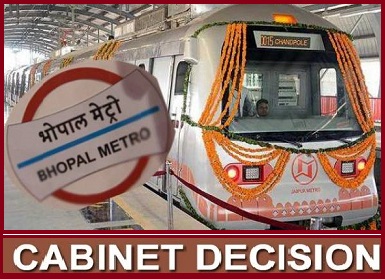 The length of Karond to AIIMS corridor is 14.99 km, which is mostly elevated and partly underground (at Bhopal Railway Station and Bus Station) and comprises of 16 Stations (14-El.evated and 2-Underground).

The length of Bhadbhada to Ratnagiri Tiraha corridor is 12.88 km comprising of 14 stations all elevated.

The project will provide continuous availability of affordable, reliable, safe, secure and seamless transport system in the urban agglomeration of the city.

The estimated cost of the project is Rs 6941.40 crore and the project will be completed in four years.

The population of 23 lakh of Bhopal agglomeration area is expected to be benefitted by Bhopal Metro Rail Project directly and indirectly.

The two corridors will be having Multimodal Integration with Railway Stations & BRTS Stations and will have feeder network of Bus, Intermediate Public Transport (IPT) and Non Motorised Transport (NMT).