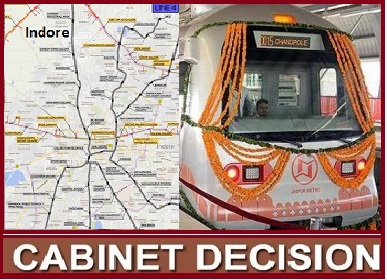 The Ring line will connect major public nodes and city cluster areas of Indore.  The numbers of stations on the Ring Line are 30.

The Indore Metro Rail Project will provide continuous availability of affordable, reliable, safe, secure and seamless transport system in the urban agglomeration of the city

It will reduce the accidents, pollution, travel time, energy consumption, anti-social incidents as well as regulate urban expansion and land use for sustainable development.

The estimated cost of the project is Rs 7500.80 crore and the project will be completed in four years.

The Indore Metro Rail Project will have non-fare box revenue from rental and advertisement as well as Value Capture Financing (VCF) through a mechanism of Transit Oriented Development (TOD) and Transfer of Development Rights (TDR).