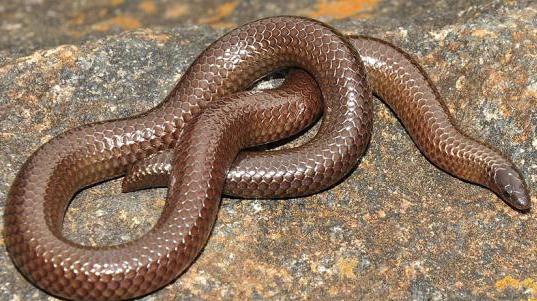 A new species of non-venomous aquatic snake has discovered and described as new species from the northern Western Ghats in Maharashtra, Goa and North Karnataka.

The non-venomous aquatic snake named Aquatic Rhabdops has been misidentified since 1863.

Earlier, It was considered as a variant of Olive Forest Snake, first described in 1863.

* Aquatic Rhabdops snakes belong to genus Rhabdops which are endemic to India.

* The aquatic snake has been named after its aquatic nature since the adults are mostly associated with freshwater forest streams and juveniles are seen in water-logged areas.

* Adults of the Aquatic Rhabdops have off-white bellies and black spots on their olive brown skin, juveniles are olive green, with yellow undersides.

* This color difference in life stages could possibly be due to the different local habitats.

International conference on the protection and preserva...

New Species of Wasp discovered in Western Ghats of ZSI

Zoological Survey of India discovers New Species of Wasp at ...

Kavery (Cauvery) and other western ghats rivers flowing from...

» New Species of Wasp discovered in Western Ghats of ZSI