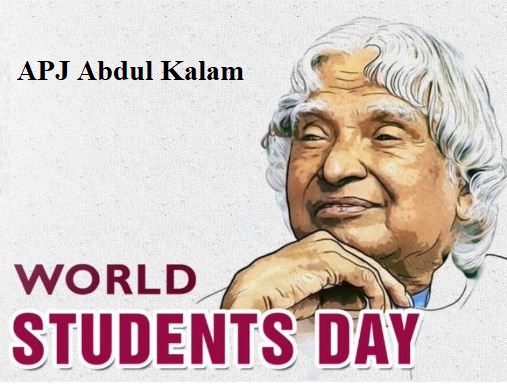 World Students’ Day is celebrated every year on 15 October around the world to mark the birth anniversary of former President of India, APJ Abdul Kalam.

World Students’ Day honors and pays tribute to him and his efforts in the field of science and technology and also the role of the teacher that he played throughout his scientific and political careers.

APJ Abdul Kalam was a dedicated person who spent his life teaching and identified himself first as a teacher and then as anything else.

Abdul Kalam was the youngest of five siblings

APJ Abdul Kalam, full name 'Avul Pakir Jainulabdeen Abdul Kalam'. He was popularly known as the Missile Man of India. He was an Indian scientist and a politician.

APJ Abdul Kalam was born on 15 October 1931 to a Tamil Muslim family in Rameswaram in Tamil Nadu. His father's name was Jainulabdeen, who was a boat owner and imam of a local mosque. His mother's name was Ashiamma, who was a housewife.

APJ Abdul Kalam suffered a cardiac arrest while delivering a lecture to the students of IIM Shillong on 27th July 2015.

15 October every year celebrated as World Student's Day on t...