Nervous System: Brain, structure of the brain, parts and their functions 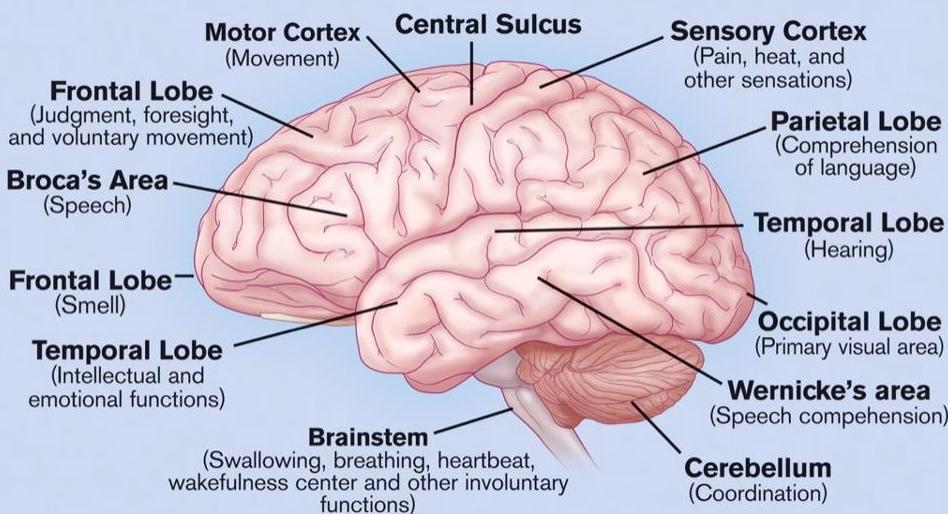 The human brain- parts and functions

Brain: The brain acts as a control and command system of the body. It is protected by the skull and is covered by three meninges. It is divisible into three main regions: forebrain, midbrain, and hindbrain.
(i) Forebrain – It consists of three regions:
(a) Olfactory lobes: These are a pair of very small, solid club-shaped bodies which are widely separated from each
other. They are fully covered by cerebral hemispheres.
(b) Cerebrum – It is the largest and most complex of all the parts of the human brain. A deep cleft divides the cerebrum into right and left cerebral hemispheres, connected by myelinated fibres, the corpus callosum.
(c) Diencephalon – It encloses a slit-like cavity, the third ventricle. The thin roof of this cavity is known as the epithalamus, the thick right and left sides as the thalami, and floor as the hypothalamus.
(ii) Midbrain – It is located between thalamus/ hypothalamus of forebrain and pons of hindbrain. Its upper surface has two pairs of rounded protrusions called corpora quadrigemina and two bundles of fibres called crura cerebri.
(iii) Hindbrain – It consists of:
(a) Cerebellum – The second largest part of the human brain is the cerebellum. It consists of two lateral cerebellar hemispheres and central worm-shaped part, the vermis. The cerebellum has its grey matter on the outside, comprising three layers of cells and fibres. It also has Golgi cells, basket cells and granule cells.
(b) Pons Varolii – An oval mass, called the pons Varolii, lies above the medulla oblongata. It consists mainly of nerve fibres which interconnect different regions of the brain.
(c) Medulla oblongata – It extends from the pons Varolii above and is continuous with the spinal cord below. The midbrain, pons Varolii and medulla oblongata are collectively called brain stem.

» Cell: Cell Cycle and Phases of the cell cycle