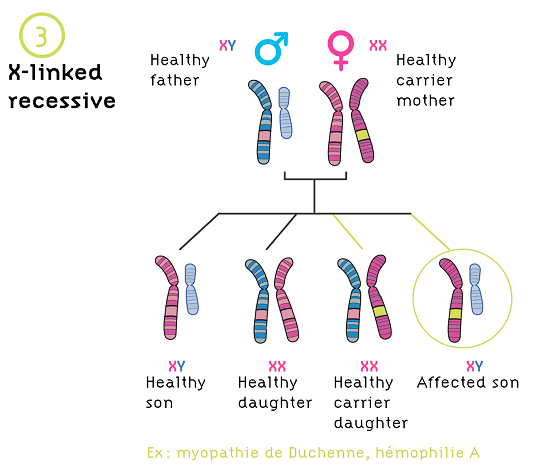 Genetic disorder has already been mentioned that the sex-determining mechanism in case of humans is XY type. Out of 23 pairs of chromosomes present, 22 pairs are exactly same in both males and females; these are the autosomes.

A pair of X-chromosomes is present in the female, whereas the presence of an X and Y chromosome are determinant of the male characters.

During spermatogenesis among males, two types of gametes are produced. 50 per cent of the total sperm produced to carry the X-chromosome and the rest 50 per cent has Y-chromosome besides the autosomes.

Females, however, produce only one type of ovum with an X-chromosome. There is an equal probability of fertilization of the ovum with the sperm carrying either X or Y chromosome.

In case the ovum fertilizes with a sperm carrying X-chromosome the zygote develops into a female (XX) and the fertilization of ovum with Y-chromosome carrying sperm results into a male offspring.

It is evident that it is the genetic makeup of the sperm that determines the sex of the child. It is also evident that in each pregnancy there is always a 50 per cent probability of either a male or a female child.