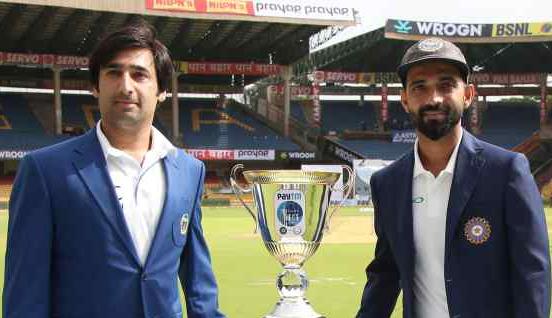 Afghanistan lost 20 wickets in a day as their Test debut ended in a two-day defeat by India on 15th June 2018 at M.Chinnaswamy Stadium, Bangalore.

Hashmatullah Shahidi (36) was the top scorer for Afghanistan in either innings as all-rounder Ravindra Jadeja finished with match figures of 6-35.

It is only the fourth time in Test history that a team has been bowled out twice in a day.

It is also the 21st time a Test has ended inside two days and the first time in India.

There were some positives for debutants Afghanistan - who were awarded Test status in June 2017 - notably the bowling of Yamin Ahmadzai, who took 3-51 in India's sole innings.

Indian team pushed on from an overnight score of 347-6 to reach 474, a total Afghanistan never looked like threatening.

Afghanistan team batted for a combined total of 66.3 overs, with only four batsmen reaching double figures in the second innings.

Man of the Match: Shikhar Dhawan (He also became the first Indian to hit a Test century before lunch with his 87-ball knock)

Result: India win by an innings and 262 runs