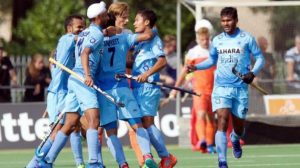 This is the first time when the entire team has been made beneficiary of the 'TOPS scheme' as earlier only individual athletes from different sports were included as beneficiaries of the scheme.

The decision to include hockey was taken after India’s performance had improved as they had finished runners-up in Champions Trophy held in the Netherlands.

The 18 team members of men's hockey team will be provided with a monthly allowance of Rs. 50,000 each under the Target Olympic Podium Scheme (TOPS).

The women’s hockey team may be also included in the TOPS after reviewing its performance in the upcoming World Cup and following Asian Games.

Indian Hockey Team makes record 26 goals in a match in ...